Everything about the four-piece dynamo known as Given – its wrenching, emotional sound, the searching quality in its lyrics, even its name – traces back to one fateful night, when in seconds this band changed forever.

Maybe if that accident had never happened, they’d still be playing the easy-going acoustic covers that had made them a fixture in their hometown of Murray, Kentucky. But we’ll never know. All we can say for certain is this:

Few bands, from local acts to worldwide phenomena, can match the intensity of Given.

Fewer would have survived the trials they’ve overcome.

And fewer still – probably none – have been so transformed by Fate, individually as artists and as a single, powerful unit.

To understand Given, listen first to From the Wreckage That Was … , their debut CD. Riding a current of thundering drums, each song speaks through layers of guitar, from an acoustic heartbeat to waves of electric. The album’s opening moments, on “Looking Down,” hurtle the listener into this turmoil, beginning with a ghostly, muted drumbeat – which, as you’ll see, has a meaning beyond its sound – and then erupting suddenly into an explosion of roaring chords under a soaring single line.

From this beginning the CD moves through profound contrasts, from the tread of “Three Days Clean,” a perfect match of music and wounded message (“I’d rather be wasted … by a firing squad/I’d rather be stoned … to death by an angry mob/I’d rather be high … on the gallows, waiting to die, than to go back there”) to the intense urgency of “Lost,” an anthem for the alienated (“I left pieces of me far behind so I can … make it back here someday, unless the rain washes them away”).

Clearly, this isn’t standard pop. Neither is it a circus of metal clichés. Rather, Given delivers something unique: honest stories of doubt and faith, confessions of confusion amidst flashes of understanding, projected to the world by the strength of their performance.

The roots of this music lie in the combination of players who make up Given. Beginning in ’99, singer/guitarists Casey Hutchins and Nathanael Bazzell, drummer Jeremy Fox, and their bass player at the time began to play the party circuit at Murray State University. These were amiable gigs: plenty of cover songs in the set, plenty of beer in the kegs. Despite their enigmatic name – Dog’s Mercury – word spread about their shows, and soon they were getting booked outside of town.

They were on their way to one such gig at Paducah early on the evening of March 31, 2001. Casey was driving at the time …

“It was raining really hard,” Jeremy remembers, “and suddenly we were hydroplaning. I got thrown halfway out – unfortunately, it wasn’t all the way, because the truck rolled over on top of me. I had all kinds of internal injuries, I had broken ribs, and my shoulder was messed up pretty bad. I ended up getting flown down to Vanderbilt Hospital in Nashville, where I was out for probably a week and recovering for four more weeks before they let me go.”

Life changed instantly for everyone in the band. The bass player, shaken, quit; Darren Hobbs would eventually take his place. Of course, with Jeremy unable to play at full capacity for a year, there were questions about whether the group should stick together at all. But for Casey, the answer was clear: Even as Jeremy lay unconscious at Vanderbilt, he began feeling the stir of new songs in his imagination.

“I used to write more typically pop material,” he explains. “But because of the accident I found myself in a state of mind that motivated me to write a different kind of lyric.”

The new songs had a questioning quality. There were songs like “Fate,” which asks, “Is there any way to fight it? Is there any way to defy it, this thing you call fate … I’m still searching for some explanation for the direction my life has taken?” There was “Clay,” a meditation on adapting to events in life that can’t be controlled: “I’m losing track of who I am/Can I call myself a man? … I’ll face another day while these people try to shape me … am I a man of clay.” And eventually, there were songs of affirmation, like “No Words”: “I’m still climbing until I stand again/I still won’t be broken or bent.”

“Around that same time a radio station in town played one of our songs,” Nathanael adds. “We had a lot of positive response. That helped get us all onboard again: We picked up Darren, decided to get out of the cover scene, and committed ourselves to playing original music.”

When Jeremy made it back from Vanderbilt, they began rehearsing. The depth of their new material pushed them toward a more electric setting; their vocal harmonies took on more force to cut through this mix, like beacons through a storm. They began playing again some eight months after the crash, once Jeremy had gone through his final surgery; over the next four months he built his drum chops back through careful practice.

By 2003 they had taken on a new name – Given, referring to the second chance fortune had bestowed upon Jeremy and the rest of them. And they were ready to cut From the Wreckage That Was … , probably the most impressive match of candid lyric and sonic intensity achieved by any emerging band in these times. Recorded in Nashville, it was an immediate hit among Given’s fans, who purchased more than a thousand copies within its first month. Their territory widened, with bookings coming in from Dallas, St. Louis, Nashville … even New York City.

With release of their new EP, Voice of Reason , Given is primed to further broaden its horizons. Late August marks the beginning of the Rockers for Relief Tour where Given will be opening for national acts in a series of benefit concerts for the victims of hurricane Katrina. New songs are being written. And for these four friends, the fires lit that night on a Kentucky highway burn on.

Their adventure is just beginning … that’s Given. 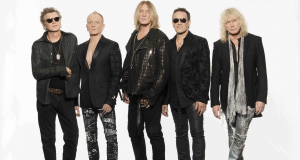